"Ever since visiting Jack Burgess' layout during the PCR/NMRA Convention last May, I have admired his use of background 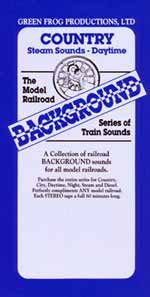 sounds in the layout room. These were not sounds that jumped right out at you. They were in the background of several scenes, waiting to be discovered naturally.

"During my visit, there were a lot of other convention visitors present and I was completely unaware of the sounds. However, when things quieted down a little, there they were -- the sounds of birds, crickets and distant steam giving a real sense to the layout. As I look back on the experience, the background sounds probably were only second to his scenery when it came to giving the layout an uncanny feeling of really being on the Yosemite Valley railroad.

"Jack's sounds were done on continuous-loop tapes and were something he worked out himself; I thought more people might add "scenic sound" if it were more convenient. Now it is.

"Green Frog Productions has released a series of audio tape cassettes that will give any model railroad a feeling of being alive with sound. The one-hour tapes are designed to be played in the background, but not as one would listen to music, a favorite locomotive, or train tape. The background sounds are designed to add an "outdoor" quality to a layout. No matter how large or small it is, with the proper volume setting and a tape player or two a layout will seem much more realistic with scenic sounds.

"Green Frog has produced a wide range of tapes. In the Country series are Daytime steam, Daytime diesel/contemporary and Daytime diesel/first generation. The City series has much the same titles. Also both series are available as either Daytime or Nighttime sounds. Of special interest to narrow gauge modelers are the narrow gauge tapes. The principle differences between the two is that the night series has the sounds of crickets, a distant thunder storm and rain.

"Green Frog includes suggested methods of mounting speakers in the layout room. I used a inexpensive "walkman" type cassette player, some small auxiliary speakers and a small nine-volt power supply from Radio Shack. The tape player was mounted into the front of the fascia board and the speakers were placed under the layout at opposite ends of the yard. The effects were as good as I had hoped.

"These audio tapes give the modeler another dimension to add to the layout. I have found that I play them even when I'm just working on the layout." Jim Wild - Railroad Model Craftsman

This page is produced and copyrighted by Green Frog Productions, 2000

We welcome your questions and comments. Please contact Green Frog at grnfrog@mindspring.com